What is Cosmic Education?

Montessori method is named after the woman who designed it more than a century ago. Dr. Maria Montessori was an Italian physician, educator, and innovator. She has been known worldwide for her educational method building on the way children learn naturally and holistically. She opened the first Montessori school called the Casa dei Bambini, or Children’s House, in Rome on January 6, 1907.

Dr. Montessori’s ideas for the child from 6 to 12 developed in the same way her ideas developed for younger children. She observed, watched and began to identify what older children were attracted to, how they learned, and what got them interested in working. From this, she determined:

Through her observations, Dr. Montessori observed older children interested in working with their hands in a different way than their younger counterparts were. Along with the work of their hands, elementary children also used their imaginations and their reasoning minds to explore their environment.

When thinking about what to offer elementary aged children, Dr. Montessori explored ideas such as, “What is the link that holds the cosmos together? What is it that makes the interrelationship between all elements of the universe and the life forms inhabiting the world? What keeps and starts the planets in their courses? What could possibly bring human beings to unity and peace? How can we begin to present these ideas to the child at the second plane of development? How can we show order as the basis of life and of culture?”

While thinking about these things she began to recognize the concept of order as the base of our culture. Law and order guides life within the universe and guides the order of life.

Cosmic Education and the Montessori method is the underlying difference to a traditional education. It is during the elementary years children will begin to see the interrelatedness of all things having to do with the universe. This includes the dramatic creation of its furnishings such as the plants and animals, the arrival of human beings and their continuing story throughout time.

Why are there no subject categories?

Our purpose – our goal – is for children to come to a full understanding of this. Cosmic Education tries not to teach subject matter within separate subjects as is done in traditional school settings. Instead subjects are interlinked as best as they can be. Moreover, children should not be broken down by their grade levels. Instead they are a part of a 6 to 9 class (lower elementary) or 9 to 12 class (upper elementary).

Because most of us are a product of traditional education, it is important to become aware of these differences and to consciously change our way of thinking about them. Elementary children should be grouped together by identifying their needs and interests, regardless of their age.

Another key life skill Montessori children develop is learning to evaluate themselves; to become consciously aware of what they are good at and what they could improve on. This is a part of finding their place in society and the world.

If they can learn to honestly and objectively critique themselves, they will know what their strengths are and will be able to share those strengths with others. They will also be able to ask for help when they need it.

This does not mean Montessori children will feel a superiority over others. Along with this key life skill comes the understanding of responsibility, care, and respect for humanity – a compassionate attitude of service.

At this level the Elementary Guide’s job is not to teach a syllabus. Instead they use presentations and stories to open up a new field of exploration to the children. It opens exploration carried out through the reasoning mind and the use of imagination.

It also means, under ideal circumstances, limiting the assignment of worksheets, workbooks, or spelling lists to be memorized. Unrelated items are not of interest to children of this age. Montessori children do not receive a lesson and then immediately take a quiz or test. Those ideas are not part of Cosmic Education.

The Elementary Guide might instead give a presentation and follow up with suggestions of where to get more materials or give ideas for further research. Children might do more work on this topic. They might not.

Cosmic Education relates the child both to the universe and to humanity in order for them to understand the law and order underlying our human existence. And, most importantly, children should be allowed to do their own internal work.

If the adult is observing and watching, they should know what concepts the children have and which they have not understood. This is found out not through testing but through their academic work and through follow up discussions with the children.

Read our montessori blog
about grumble
back to home 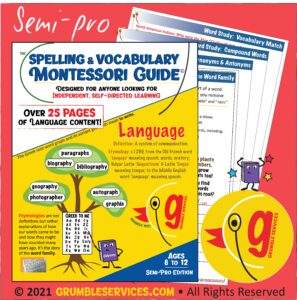 From The CLASSROOM TABLE To Your DINING ROOM TABLE. We’re here for you! 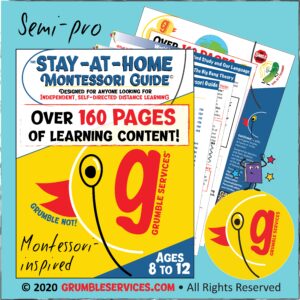